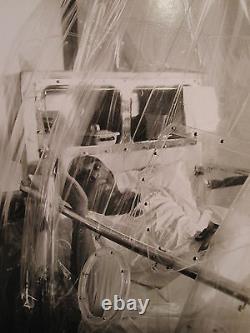 Some bends, creases, here and there, some as seen in pictures. When Francis Miller was about twelve years old he got his first camera, a Brownie, and began developing his films in the family bathtub.

He studied journalism at the University of Texas, was sports editor of the Daily Texan, a college newspaper, and managing editor of the Texas comic monthly, The Texas Ranger. He studied art in the Chicago Academy in the summers.

In 1927 when he was twenty-one, he went to work for the Houston Press as a combination artist, reporter and photographer. He had only dabbled in photography, but as a reporter he soon learned that the camera can tell a story better than words, so he became a pioneer in candid news photography. As a reporter covering the southwest, Miller was a journalistic jack-of-all-trades, writing news stories, taking the pictures for them and often making the layouts. He also drew cartoons, wrote a biography of W.

Miller was the first to cover a Caesarian birth fully with pictures for the press, which, when published, attracted much attention, and then was finally used in TIME, before the advent of LIFE Magazine. Nig' (Francis' nickname) Miller freelanced for LIFE before the war and became a LIFE staff photographer in 1947, and was based in Chicago. During the war he worked for Naval Intelligence and was a combat photographer.

In 1945, the Navy ordered him from Iceland to Australia where he met and married an Australian girl. Miller was an artist at concealed camera photography.

He had hidden miniature cameras rigged behind his tie, in half-open brief cases and in hollowed-out books to make pictures in closed political sessions where the participants would just as soon have no photography. Miller transferred to Washington D. C in 1964 and worked out of LIFE's Washington, D. Miller combined ingenuity and ability: in 1952 he photographed a Republican National Committee meeting in Chicago with two hidden cameras. Six years later, he used similar tactics to photograph a band of gamblers in Cuba. His warm heart for animals brought Miller, in 1964, to photograph the presidential beagles on the White House lawn. Miller brought with him for this assignment, not only his 30 years of experience, also a rubber bone, sack full of Dog Yummies, and a harmonica. Miller stretched himself out on the lawn of the White House and alternately barked like a dog, tossed the bone in the air, plied the beagles with Dog Yummies and huffed into the harmonica. This juggling act, which came easily to Miller, left his right hand and his right eye free to shoot the assignment. Miller retired from LIFE in 1968.

He lived in Washington D. Until his death on November 5, 1973 at the age of 67. Sellers: Get your own map of past buyers.

This item is in the category "Collectibles\Photographic Images\Photographs". The seller is "theprimitivefold" and is located in this country: US. This item can be shipped worldwide.