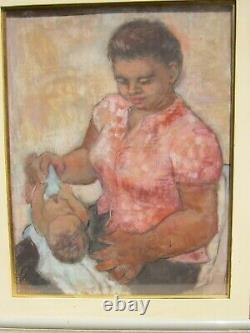 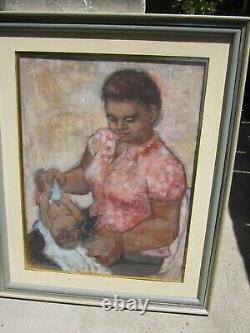 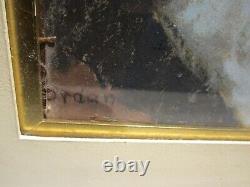 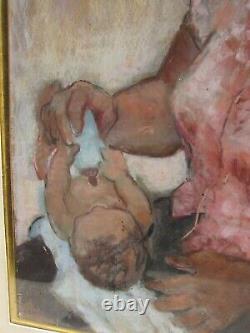 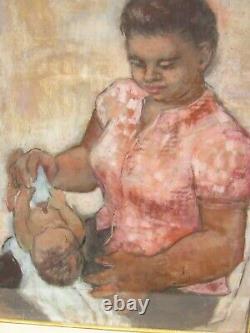 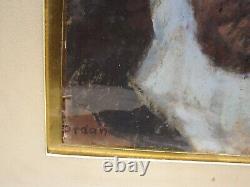 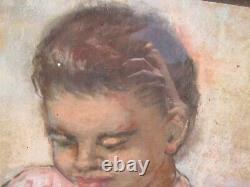 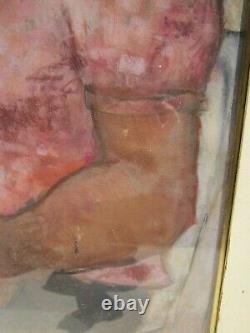 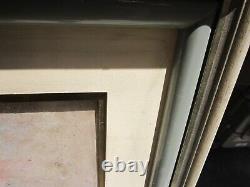 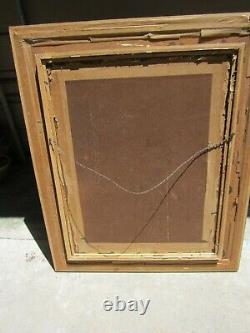 Here is a wonderful depiction of a black woman tending to a child of like color. The sensitivity is remarkable and he really captures this caring moment. The work itself is 22"x 28" pastel on masonite:a medium and surface that Jorden is known for..

It's in a period frame. The J' on the signature has been cut off:the whole side probably to fit the frame. The ORDAN are all in caps and correctly compare with his known signature. The person I bought it from told me that the painting was done by a famous southern African-American artist.

T h e w o rk is pastel on masonite which is a medium and surface he is known to u se. An African-American sculptor, painter, graphic artist and art educator, Jack Jordan was Professor of Art at Southern University in New Orleans. He also served on the State of Louisiana Commission of Creative and Performing Arts. Degree in 1948 from Langston University in Langston, Oklahoma; an M.

Work by Jordan is at the Oakland Museum. Exhibition venues include Howard University and Smith-Mason Gallery in Washington DC. Many of his works are figural and address religious, mythology and social realist subjects such as linocuts Madonna and Childand Diana and Apollo; marble sculptures Struggle for Freedom and Cinderella was a Soul Searcher; bronze sculpture African Drummer; and paintings such as Black Seated Madonna, Ghetto Children and I Had a Dream of Africa.

CareerThe University of Iowa in Iowa City, Iowa. During the time of his undergraduate career, Jordan became fascinated with an instructor who drew while being accompanied by music. Jordan later recalled that the instructor had described this as a painting recital. Jordan adopted this technique and held demonstrations across the country, using pastels on masonite, a musical selection of his choice, and a narration by his wife. A typical demonstration of this sort would last nearly a half-hour. After successfully obtaining his bachelor's degree from Langston University, Jordan knew that his passion was in the arts and decided to go for his master's degree at the State University of Iowa in 1949. It was here that Jordan received his MFA. Jordan went into the military from 1950 to 1952. During his years in the service, he did not cease to utilize his art training. He was commissioned to draw illustrations for training aids and eventually was made the art editor and chief cartoonist for the post newspaper at Fort Campbell, Kentucky. Honorably discharged from the military in 1952, Dr. Jordan was asked to set up the art department at Allen University in Columbia, South Carolina.

During these years, Jordan also painted a large mural located in the education building of SUNO. The mural was destroyed during Hurricane Katrina and the building was subsequently demolished. [1] Honors and AffiliationsDuring his lengthy career, Dr. Jordan's academic honors included an Alpha Phi Alpha Fraternity, Inc.

National Scholarship in 1957, a Scholarship Award from Langston University, and the Indiana University Award. [1] Jordan was a founding member of the National Conference of Artists in 1959.

Jordan, Chicago based artists Bernard Goss, Marion Perkins, Robert Jones, and Margaret Burroughs started the effort to congregate African American artists from all parts of the U. To discuss the concerns they shared.

These African American artists were sent invitations to attend a conference on March 28 and 29, 1959, which ran at the same time as the 18th Annual Atlanta University Art Exhibition. This was the first official meeting of the NCA. Jordan was the chairman of the NCA from its inception until 1967, when he became the vice-chairman. The position of chairman was then given to Jimmy Lee Moseley of the Maryland State College in 1967, yet Jordan remained affiliated with the NCA as lead historian until his death. [4] Collections/ ExhibitionsFour of his prints are available at the The Metropolitan Museum, gifted by Reba and Dave Williams in 1999.

Jordan is also a part of the Clark Atlanta University Art Galleries' permanent collection. The exhibition, "Bitter/Sweet", which opened October 9, 2016 at CAU Art Museum, highlighted works from the 1940s to present on the theme of the African American experience.