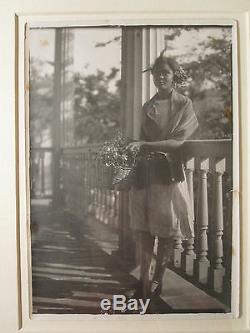 An original photograph by photographer and pain ter Chansonetta Stanley Emmons. (1858 - 1937) measuring approximately 7 x 4 7/8 inches. Stanley Emmons works include photographs of rural people, including African Americans, in Charlestown, South Carolina, in the 1920s. She was born on December 30, 1858 in Kingfield, the only daughter of Apphia and Solomon Stanley Emmonss seven children.

Chansonetta was nicknamed Netta, because her French-inspired name meaning, little song was too difficult for Mainers to pronounce. Apphia died when Netta was only sixteen. Being the only girl out of six brothers, Netta grew into a very determined and headstrong woman. She often expected that the world would revolve around her needs! She began her education in a one-room schoolhouse on Riverside Street near her home.

At the age of eighteen, in 1876, Netta enrolled in the Western State Normal School at Farmington. Upon concluding her studies to become a teacher, she discovered that her love of art work far outweighed her desire to become an ordinary school teacher. Netta left Farmington and relocated to Boston to follow her hearts passion of the arts.

In 1886, she studied with artists J. During this time, at what was then considered the spinster age of twenty-nine, Netta met James Nathaniel Whitman. James was a tall, dark and handsome man from a well established New England family.

They were married on February 2, 1887 in Lewiston. She was widowed by the age of forty, and thus, became the single parent of her daughter, Dorothy. Netta was regarded as a beautiful, charming, and slightly old-fashioned Victorian lady.

She considered herself to be sympathetic to the uneducated and poor, and yet she longed for the finer things in life. However, she never truly worked for a living. Instead, she chose to accept the financial support of her brothers, who became millionaires by establishing the Stanley Dry Plate and Stanley Steamer automobile enterprises. Chansonetta studied art and oil painting which developed into what she was best known for, photography.

In the first decades of the 20th century, she produced captivating pictures of New England people at work, families at home, children at play, and the everyday activities of rural farmers in Maine. Her work expanded over the years with the help of her daughter, Dorothy. Among her most noted pictures are those of rural people, including African Americans, in Charlestown, South Carolina, photographed in the 1920s. Chansonetta and Dorothy traveled the country and exhibited glass lantern slides, all hand painted to project onto a screen in color. When Chansonetta lost all her hearing, Dorothy would conduct the presentations as Chansonetta worked the projector from the back of the room. Chansonetta Stanley Emmons died at the age of 79. Her nephew Raymond Stanley wrote her obituary. Emmons devoted a great part of her life to artistic pursuits and was a photographer of noteBest known of her works are her photographs of Charleston, S. She has received awards for both in national and local exhibitions. Noted photographer Berenice Abbott wrote of Chansonetta.

Though hers was a conservative upbringing, her eye saw the reality of other situations the primitive strength of Maine farming families, the beauty and dignity of the southern blacks. At times there is a hurried look to her approach; spurred possibly by a sense of guilt at the abject poverty. The Stanley Museum in Kingfield, has loaned of its collection of 1,600 Chansonetta items for five years to the Maine Women Writers Collection at the University of New England in Portland. Exhibition curated by Naomi Rosenblum and Susan Fillin-Yeh. Contributed by Elizabeth Ann Donnell, Greene, Maine, 2008.

Sellers: Get your own map of past buyers. The item "ANTIQUE AMERICAN WOMAN PHOTOGRAPHER CHANSONETTA EMMONS SC AFRICAN AMERICAN PHOTO" is in sale since Friday, August 25, 2017. This item is in the category "Art\Art Photographs".

The seller is "theprimitivefold" and is located in Lunenburg, Massachusetts. This item can be shipped worldwide.