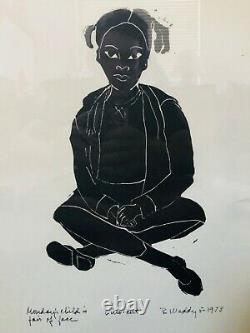 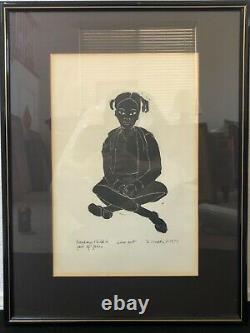 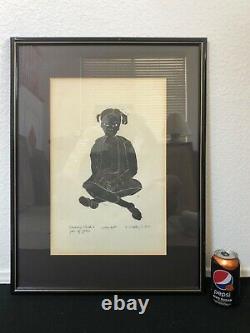 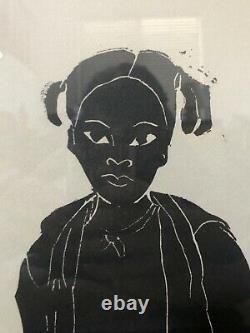 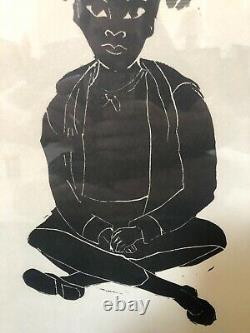 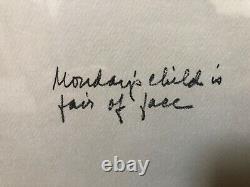 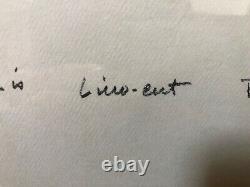 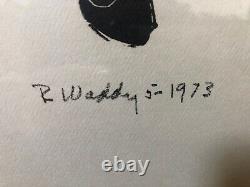 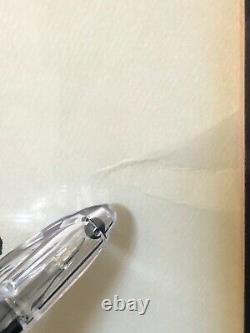 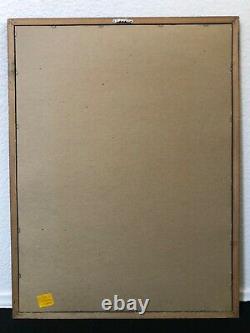 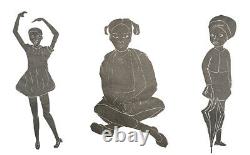 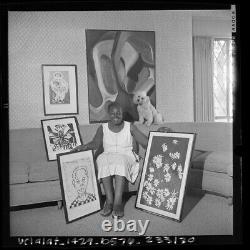 This is a wonderful and rarely seen Antique Mid Century Modern Black African American Lithograph Linocut on paper by esteemed Los Angeles artist, printmaker, educator and activist Ruth G. Waddy (1909 - 2003), who was a founding and important member of the Black Arts Movement. This linocut is in thick artists paper, and is #1 of a series of seven prints by the artist titled The Children. The words on this print read: Mondays child is fair of face, Lino-cut, and R Waddy 5- 1973. This linocut is in overall good condition, with a few small areas of creasing and edge wear please see photos.

Upon receiving an honorary doctorate in fine art from Otis Art Institute of Parsons School of Design in 1987, Ruth Gilliam Waddy was lauded as a "painter, printmaker, and advocate of artistic opportunity" and a prophet exclaiming the news of black artists and calling upon the world to embrace them. Indeed, in the late 1960s Waddy became one of the most important advocates for African American art in California and across the United States. After trying to make a living in Chicago, where she was denied a job as a solderer during World War II because of her race, Waddy, then a young mother, left the Midwest for Los Angeles.

In California she worked as a riveter for Douglas Aircraft Corporation and held other odd jobs (including as an intake clerk at Los Angeles County Hospital, where she worked with Noah Purifoy) before taking a ceramics class that sparked her interest in art. Waddy went on to study art through the Famous Artists Home Study Course and at Los Angeles City College and Otis Art Institute, quickly becom­ing an adept printmaker whose favored medium was linocut. She exhibited her prints widely in the United States and traveled to the Soviet Union in 1966 as part of a delegation of eight American artists. Traveling on the recommen­dation of Charles White, who had made the same trip several years earlier, Waddy carried her own work abroad as well as twenty prints created by other black California artists. Before her trip to the U.

Waddy had journeyed cross-country via Greyhound bus to collect prints by black artists for the 1965 volume. Prints by American Negro Artists.

In 1969 Waddy also contributed her extensive knowledge of contemporary African American artists to the influential two-volume series. Coedited with artist, teacher, and gallerist Samella S. In her introduction, Waddy clearly outlines her view of art making: Art is not an intellectual exercise, approached through structured learning, emo­tions, styles, and practised. In museums, galleries, and private'collections.

Art is spiri­tual, the primary function of which is for the benefit, growth and improvement of the human animal. " She adds, "From whatever point of view, aesthetic or social, [the black artist] has always had to tell it'like it is. Waddy's own work, included at the end of the first volume, was represented by an array of linocuts from the mid-1960s.

Her stylisti­cally diverse prints depict abstracted African motifs, floral still lifes, pastoral genre scenes, and explicitly political subjects, such as a group of African revolutionaries in the 1969 linocut. Which dramatically frames its central figures with dark black geometric forms. Working from a scrapbook of images clipped from newspapers and magazines, Waddy chose subjects from everyday lifefruit and flowers, for examplethat are, in her words, about "color, whimsy, joy, " in addition to being affecting images of social strife. Despite Waddy's achievements as a fine artist, she always insisted on characterizing herself first and foremost as an arts organizer and advocate. In addition to her work with Roelof-Lanner and Lewis, Waddy brought together a group of preeminent black artists to form the organization Art West Associated.

Beginning with little knowledge of the Los Angeles art scene, Waddy collected the names of black artists making work respected by their peers. She first contacted Daniel LaRue John­son, who directed her to Melvin Edwards, who in turn told her about George Clack, and so on. Describing herself as a nonartist, Waddy con­vened a meeting of black artists in 1962 in the back room at the Safety Savings and Loan Company, where Art West Associated was born. The Los Angelesbased group had a sister chapter in San Francisco called Art West Associated North.

For her cen­tral role in bringing artists together to promote their work, Waddy did not go unrecognized. She received numerous national awards for leadership over the course of her career and has been regarded with great admiration by those with whom she worked.

As artist Alonzo Davis remarked, What I got from Ruth was her strength of belief in the African American culture. Solo exhibition, Jimmy Crawford's Frame Shop, Los Angeles, 1964. Internationale Buchkunst-Ausstellung, Leipzig, East Germany, 1965. The Negro in American Art.