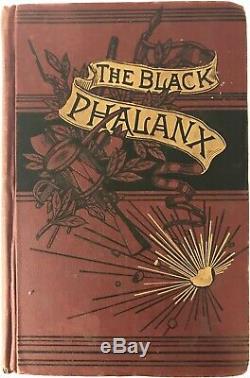 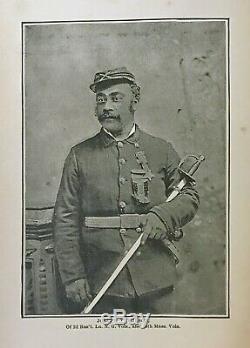 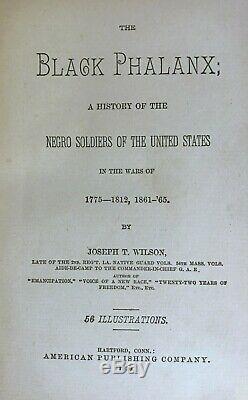 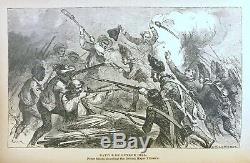 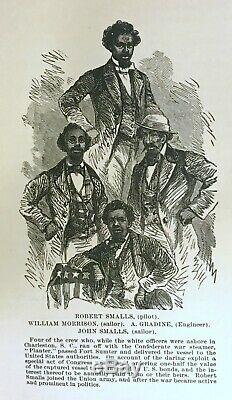 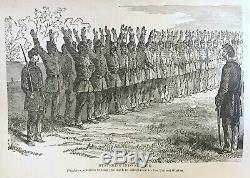 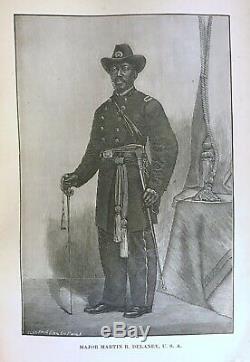 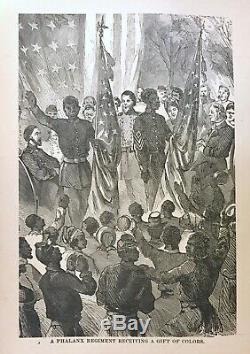 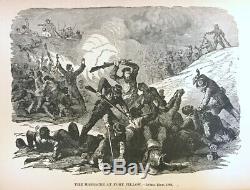 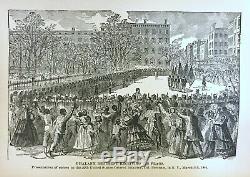 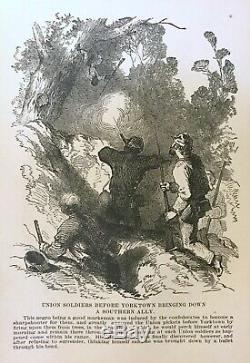 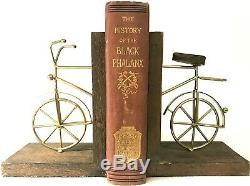 This sale is for an original 1890 EDITION of " THE BLACK PHALANX " written by Joseph T. Wilson, author of Emancipation , and Voice of a New Race. YOU'LL LOVE THIS BOOK!! This is the history of the African-American soldiers who served in the Revolutionary War, the War of 1812, and the Civil War.

It was the author's goal to present a more complete record of the deeds of black soldiers, which were (and are) often abbreviated or altogether missing from other military history books. This work highlights all of the conflicts in which these soldiers played so important a part. Of his work, the author writes, My aim has been to write in the spirit which impelled the soldiers to go forth to battle, and to reverse the accounts given in the popular histories which ascribe to the generals and colonels who commanded, instead of the soldiers who did the fighting, victory or defeat. This work is divided into 3 parts. Part 1: The Wars for Independence.

This includes the war of 1775, or as it is better known today, the Revolutionary War. From the sentiments of the colonists to sparking the fire of freedom, readers will access a rarely seen perspective on the events of that war, that of the black soldiers. Perhaps the most compelling portions of this chapter include the colonists' beginning to favor the black troops, General Washington's empathetic language toward them, followed by the ultimate cruel re-enslavement of the discharged soldiers. Part 1 also includes the War of 1812 , perhaps told through stories not often heard.

Read a new perspective on the events from the seizure of African-American sailors, to the battle of New Orleans. Part 2: The War Between the States. This is the lengthiest portion of the book, including 14 chapters on the Civil War. From public opinion to the early steps of recruiting and organizing, to the formation of the Black Phalanx, this section shows the battles bravely fought by black soldiers. Their skill and courage is showcased here in a way that is carelessly missing from most military history books.

Within these pages you will see the ways in which these men were honored, but also how their efforts were undervalued, even abhorred in several instances. These men faced not only an enemy in battle, but also the hatred of many, and a government which turned a blind eye, ungrateful for their contributions.

The book closes with information about the soldiers' efforts to educate themselves and their contributions to educational institutions, as well as contributions made to the Lincoln Institute and Lincoln Monument. There are many sides to every story and it is an unfortunate reality that many history books twist, shorten, or eliminate the truth. Bold books like this one offer readers the chance to absorb the many perspectives which make up our shared history, making it an excellent addition to any American home library! INCLUDES 56 ILLUSTRATIONS AND PORTRAITS!! P ublished in 1890 , this book is in VERY GOOD CONDITION!!!

For its age and especially to be 130 YEARS OLD!!! Printed on thick, quality paper, and firmly bound with NO TEARS! This book measures 6" X 9" and is complete with 528 pages. GET IT WHILE YOU CAN!!

Please see our other books too! The item "BLACK PHALANX History of AFRICAN AMERICAN SOLDIERS Revolutionary Civil War 1812" is in sale since Friday, May 15, 2020.