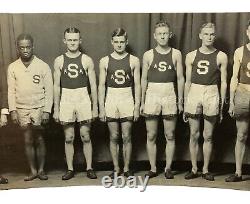 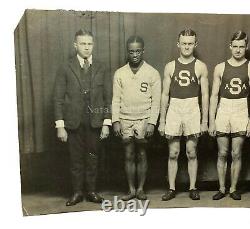 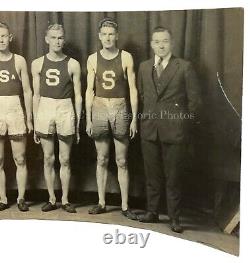 Further identifications for a Penn State historian should be possible, some of these men could even have played on contemporary football teams. The man far left (in uniform) is Daniel Bernette Taylor b.

Taylor was a successful athlete at both his Philadelphia high school and all four years at Penn State. He received an Agricultural Chemistry degree from Penn State in 1922, the very class that he was contracted to teach the following year at the Tuskegee Institute.

In 1930 he was awarded a medical degree from Howard and went into practice. Rich tones and strong contrast, measures 4 x 9.5. With corner wear (single chip top left) and heavy thumb crease at right edge (does not affect subject).

Member and captain of two winning relay teams at Pennsylvania University. Member of the team, winning second place at National Championships in Chicago, together with now Dr. He was inducted into the Students' Army Training Corps, September 1918-December, 1918. Received Scholastic Athletic Scholarship, December 1918 at Pennsylvania State College. Member of Varsity cross-country, 1918 and 1920, competing in Intercollegiates at Yale, 1920. Member of Varsity track team for four years, winning at least ten points in all dual meets and Letter each year. Member of World's record-holding Distance Medley Relay Team 1922, College Champion Medley Relay Team of America, 1920, National Sprint Relay champion Relay team, 1920, Pennsylvania (western) Quarter Mile Champion, 1922. He was credited several times with 10 seconds in the 100-yard Dash, 22 seconds in the 220-yard Dash, and 50 seconds in the 440-yard Dash. He was a participant in the Inter-Collegiate Track Championships, 1920, at the University of Pennsylvania in 1920 and Harvard University in 1922. Please see photos and ask questions. This item is in the category "Collectibles\Photographic Images\Photographs". The seller is "rarebooksandpaper" and is located in this country: US. This item can be shipped to United States.