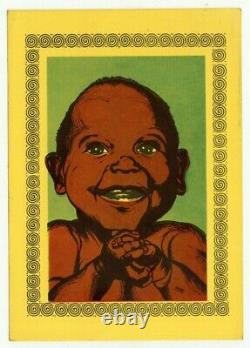 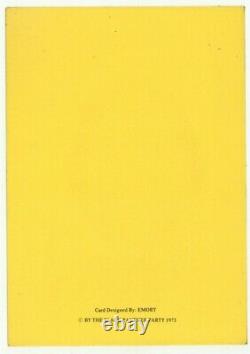 These were relatively common and printed on thin white paper. The art on them were reproductions of the Douglas's covers from the Panther's Intercommunal newspaper. They feature unique drawings of Douglas' black revolutionary art that, to the best of our knowledge, have not appeared elsewhere. Measures 5" x 7" inches. Reverse has date and indicia.

1943 is an American artist who worked as the Minister of Culture for the Black Panther Party starting in 1967. His graphic art was featured in most issues of The Black Panther newspaper (which had a circulation of approximately 100,000). As the art director, designer, and main illustrator for The Black Panthers, Douglas created images that became icons, representing black American struggles during the 1960s and 1970s. He is considered to be that most prolific and persistent graphic agitator in the American Black Power movements.

Douglas profoundly understood the power of images in communicating ideas and used this knowledge to further the cause of the struggle of African Americans for racial equality. GUARANTEE: We offer a lifetime guarantee on all of our items to be authentic originals issued by the organization stated. They are not later re-issues or reproductions. We forensically examine all of our items prior to listing to make certain they are authentic. Oxxbridge Galleries was founded in 1987 and specializes in paper items with a particular emphasis on counter culture.

The seller is "oxxbridgegalleries" and is located in Allendale, New Jersey. This item can be shipped worldwide.