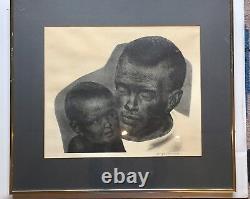 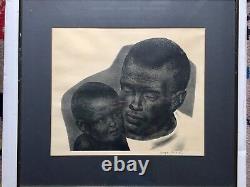 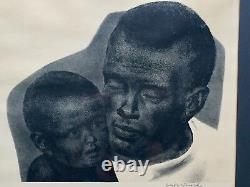 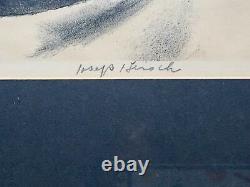 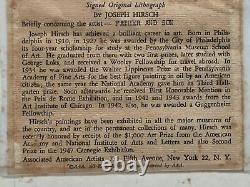 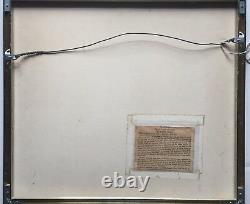 A limited Edition (AAA) Signed Original Lithograph by Joseph Hirsch. Sight 11 h x 13 w. Framed & Matted: 16 ¾ h x 18 ¾ w x 1 d. Gold Metal Frame, Dark Gray Matte. Condition: Light toning around margins, very good condition for its age. Bio: Joseph Hirsch (19101981) was an American painter, who was born in Philadelphia. Hirsch began his study of art at the Philadelphia Museum when he was seventeen. He also studied privately with Henry Hensche in Provincetown and George Luks in New York City. In addition to formal study, Hirsch traveled extensively, including a five-year stay in France. He participated in the Works Project Administration in the easel painting division, with occasional work in the mural division, where he painted murals in the Amalgamated Clothing Workers Building and the Municipal Court. During World War II, Joseph Hirsch took part in the war effort, as an artist war correspondent, recording significant battles and events.

He taught at the Chicago Art Institute, the American Art School, University of Utah, and had a significant tenure at the Art Students League in New York. He also won many awards, among them were a fellowship at the American Academy in Rome, the Walter Lippincott Prize, First Prize at the New York World's Fair (1939), the Guggenheim Foundation Fellowship (1942, 1943), and the Fulbright Fellowship (1949). In 1954 he was elected into the National Academy of Design as an Associate member and became a full Academician in 1958.

Early in his career, Joseph Hirsch was introduced to the movement of Social Realism through George Luks, who was one of "The Eight". This group of painters, at the beginning of the century, chose to depict ordinary and everyday scenes. From this movement stemmed the Social Realism genre of the 1920s and 1930s.

Particularly during the Great Depression, social consciousness, and commentary were important components of the movement, dictating subject matter. Social commentary was the backbone for the majority of Joseph Hirsch's paintings. Although Social Realist painters often used specific themes, there was no specific style that all the painters followed (except realism). In his mature period, the 1960s and 1970s, Hirsch used a series of layered planes to compose the painting. Often, there are a series of two-dimensional zones in which the figures reside.

Typically, these planes are frontally oriented towards the viewer of the painting. Depth is suggested by layering of planes and the figures contained within, rather than through perspective. These paintings appear to be snapshots, capturing people in mid-action, not posing. Hirsch's works are part of the permanent collections in. Navy Art Collection, NAVAL HISTORICAL CENTER, WASHINGTON DC.

This item is in the category "Art\Art Prints". The seller is "4636al" and is located in Saint Petersburg, Florida.