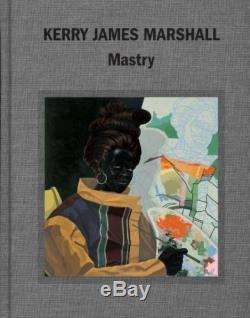 Throughout a career spanning four decades, Kerry James Marshall has continuously interrogated and addressed the omission of black individuals from the Western art-historical canon. Across painting and a variety of different media, his complex and multilayered portrayals synthesize disparate genres, while seeking to counter stereotypical representations. As Lanka Tattersall notes, Marshall's determination to mark the historical absence of black bodies in the Western canon of painting and his emphatic, programmatic insertion of blackness into the field of art are carried through the literal matterthe pigmentsof his paintings. Marshall was born in 1955 in Birmingham, Alabama. He studied at the Otis Art Institute in Los Angeles, earning his B. In 1978 and an honorary doctorate in 1999. In 2014, Marshall joined David Zwirner. Kerry James Marshall: Look See, an exhibition of new paintings by the artist, marked his first gallery solo show at David Zwirner in London that same year.

The show was first shown at Museum of Contemporary Art Chicago in 2016, followed by the Met Breuer in New York. In 2015, he created a large-scale mural specifically for the High Line, marking the artists first public commission in New York. In 2013, his work was the subject of a major survey entitled Kerry James Marshall: Painting and Other Stuff.

The exhibition was first on view at the Museum van Hedendaagse Kunst Antwerpen in Antwerp. In 2014, it traveled to the Kunsthal Charlottenborg in Copenhagen, and was co-hosted by two venues in Spain, the Fundació Antoni Tàpies in Barcelona and the Museo Nacional Centro de Arte Reina Sofía in Madrid. Campbell, Madeleine Grynsztejn, and Philippe Vergne. Text by Ian Alteveer, Kerry James Marshall, Helen Molesworth, Dieter Roelstraete, and Lanka Tattersall.

The definitive monograph on contemporary African American painter Kerry James Marshall, accompanying a major traveling retrospective. This long-awaited volume celebrates the work of Kerry James Marshall, one of Americas greatest living painters. Born before the passage of the Civil Rights Act, in Birmingham, Alabama, and witness to the Watts riots in 1965, Marshall has long been an inspired and imaginative chronicler of the African American experience. Best known for large-scale interiors, landscapes, and portraits featuring powerful black figures, Marshall explores narratives of African American history from slave ships to the present and draws upon his deep knowledge of art history from the Renaissance to twentieth-century abstraction, as well as other sources such as the comic book and the muralist tradition. With luscious color and brushstrokes and highly detailed patterning, his direct and intimate scenes of black middle-class life conjure a wide range of emotions, resulting in powerful paintings that confront the position of African Americans throughout American history. Richly illustrated, this monumental book features essays by noted curators as well as the artist, and more than 100 paintings from throughout the artists career arranged thematically by subject: history painting; beauty, as expressed through the nude, portraiture, and self-portraiture; landscape; religion; and the politics of black nationalism. This title is out of print. Hardcover, illustrated throughout, 320 pages.