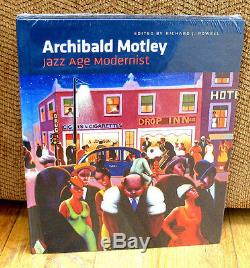 No dust jacket as issued. New and sealed with a small tear in the shrink wrap. Archibald Motley is most famous for his colorful chronicling of the African American experience during the 1920s and 1930s, and is considered one of the major contributors to the Harlem Renaissance, or the New Negro Movement, a time in which African American art reached new heights not just in New York but across America, its local expression is referred to as the Chicago Black Renaissance. The Renaissance marked a period of a flourishing and renewed black psyche.

There was a newfound appreciation of black artistic and aesthetic culture. Consequently, many black artists felt a moral obligation to create works that would perpetuate a positive representation of black people.

During this time, Alain Locke coined the idea of the New Negro, which was very focused on creating progressive and uplifting images of blacks within society. The synthesis of black representation and visual culture drove the basis of Motley's work as a means of affirming racial respect and race pride. Featuring more than 200 color illustrations, the catalogue Archibald Motley: Jazz Age Modernist accompanies the first full scale survey of the work of Archibald Motley, was on view at the Nasher Museum of Art at Duke University from January 30, 2014, through May 11, 2014. Was an American painter, master colorist, and radical interpreter of urban culture.

Among twentieth-century American artists, Motley is surely one of the most important and, paradoxically, also one of the most enigmatic. Born in New Orleans in 1891, Motley spent the first half of the twentieth century living and working in a predominately white neighborhood on Chicago's South Side, just blocks away from the city's burgeoning black community. During his formative years, Chicago's African American population increased dramatically, and he was both a witness to and a visual chronicler of that expansion. In 1929 he won a Guggenheim Fellowship, which funded a critical year of study in France, where he painted Blues and other memorable pictures of Paris.

In the 1950s, Motley made several lengthy visits to Mexico, where his nephew, the well-known novelist Willard F. While there, Motley created vivid depictions of Mexican life and landscapes.

He died in Chicago in 1981. Motley's brilliant yet idiosyncratic paintings, simultaneously expressionist and social realist, have captured worldwide attention with their rainbow hued, syncopated compositions. The exhibition includes the artist's depictions of African American life in early-twentieth-century Chicago, as well as his portraits and archetypes, portrayals of African American life in Jazz Age Paris, and renderings of 1950s Mexico. The catalogue includes an essay by Richard J.

Powell, organizer and curator of Archibald Motley: Jazz Age Modernist, as well as contributions from other scholars examining the life, work, and legacy of one of twentieth-century America's most significant artists. After debuting at the Nasher Museum of Art, the exhibition travelled to other museums across the country: the Amon Carter Museum of American Art, Fort Worth, Texas; Los Angeles County Museum of Art, California; Chicago Cultural Center, Illinois; and Whitney Museum of American Art, New York. Driskell, Olivier Meslay, Amy M. New sealed copy in the publisher's shrink wrap. There is a small tear in the shrink wrap not effecting the book. The item "New Sealed Archibald Motley Jazz Age Modernist African American Black Art HC" is in sale since Friday, April 15, 2016. This item is in the category "Books\Antiquarian & Collectible". The seller is "hmxa15a" and is located in Island Park, New York. This item can be shipped worldwide.