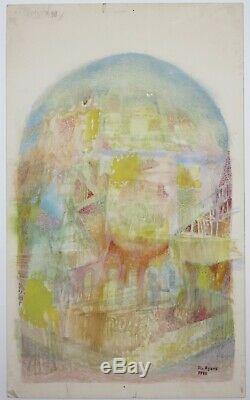 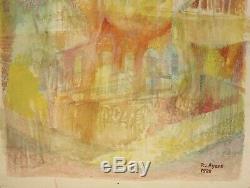 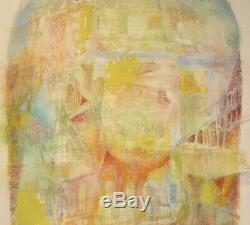 Ayers holds the distinction of having participated in the first important survey of African-Americans. Contemporary Black Artists in America. A 1971 show at The Whitney. Artist and art educator, Roland Ayers was born on July 2, 1932, the only child of Alice and Lorenzo Ayers, and grew up in the Germantown district of Philadelphia. Ayers served in the US Army (stationed in Germany) before studying at the Philadelphia College of Art (currently University of the Arts). He graduated with a BFA in Art Education, 1954. He traveled Europe 1966-67, spending time in Amsterdam and Greece in particular. During this period, he drifted away from painting to focus on linear figurative drawings of a surreal nature. Shorty before his second major trip abroad in 1971-72 to West Africa, Ayers began to focus on African themes, and African American figures populated his work almost exclusively. In spite of Ayers travel and exploration of the world, he gravitated back to his beloved Germantown, a place he endowed with mythological qualities in his work and literature. His auto-biographical writing focuses on the importance of place during his childhood.

Ayers journals meticulously document the ethnic and cultural make-up of Germantown, and tell a compelling story of class marginalization that brought together poor families despite racial differences. The distinctive look and design of Germantown inform Ayers visual vocabulary. It is a setting with distinctive Gothic Revival architecture and haunting natural beauty.

These characteristics are translated and recur in the artists imagery. During his childhood, one of the only books in the Ayers household was an illustrated. The images within had a profound effect on the themes and subjects that would appear in his adult work. Figures in an Ayers drawing often seem trapped in a narrative of loss and redemption.

Powerful women loom large in the drawings: they suggest the female role models his journals record in early life. The drawings can sometimes convey a strong sense of conflict, and at other times, harmony. Nature and architecture seem to have an antagonistic relationship that is, ironically, symbiotic.

A critical turning point in the artists career came in 1971 when he was included in the extremely controversial Whitney Museum show, Contemporary Black Artists in America. The exhibition gave Ayers an international audience and served as a calling card for introductions he would soon make in Europe. Ayers is a particularly compelling figure in a period when black artists struggled with the idea of authenticity. A questioned often asked was Is your work too black, or not black enough?

Abstractionists were considered by some peers to be sell-outs, frauds or worse. Figurative work was accused of being either sentimental or politically radical depending on the critical source.

Ayers made the choice early on to be a figurative artist, but considered his work devoid of political content. Organizations such as Chicago s Afri-Cobra in the late 1960s asserted that the only true black art of any relevance must depict the black man and woman. A martial agenda of this nature trivialized the work in Ayers view. A devotee of Eastern religions, Ayers sought to explore deeper subjects of a less topical nature, thereby stepping outside political discourse.

This is not to suggest that he was a man who rejected the physical world. He was profoundly interested in awareness of our environment, and how it relates to self-awareness. He often spoke of universality and timelessness as qualities to strive for in his art. Roland Ayers: In His Own Words.

A person who refuses or is unable to give into the general consensus of his or her society may retain the capacity to see the world in a vastly different way. That person, in addition to having his or her personal construct of the world and we all have that usually has also retained the capacity to be more aware of that unique way of seeing as well as to use it. (my work) oftentimes reveals my fragmented consciousness: full of dream states and visions concerning one-world-togetherness: bits and pieces of primal religiosity that point to Europe as much as it does Africa; Afro-American cultural imagery, all presented up-front with an optimistic facade. However, there is another side: part of the dream as nightmare, simmering terrors underneath or just around the corner, ominous dark skies, lonely figures, fragmentary, confused thoughts on being black in the dark, cavernous belly of America, curses and cries in the night.

I cannot always decide which story the finished product illuminates: an upbeat optimist or a frustrated, lonely pessimist. Or both at once: Gemini-like, each facing his own way, one foot planted in the West, the other in the East.

The seller is "citypictures" and is located in Athens, New York. This item can be shipped worldwide.