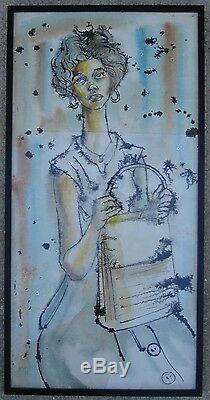 Horizontal line on upper half is glass reflection. Jeffrey Richardson (Jeff) Donaldson (19322004) was an important and influential African-American artist and art educator during the second half of the twentieth century.

Working within the context of the Black Arts Movement of the 1960s and beyond, Donaldson pioneered a distinctively Afrocentricor, using the term he coined, TransAfricanaesthetic that championed the societal contributions of African Americans and, as an artistic counterpart to the Black Power Movement, challenged white hegemony. Jeff Donaldson was born in Pine Bluff (Jefferson County) on December 15, 1932, the youngest of four siblings. His parents were Sidney Frank Donaldson Sr.

His widowed mother supported the family by working first as a teacher and later as a high school principal in Jefferson Countys segregated school system. As a woman who, according to Donaldson, insisted on being treated with respect and resisted the prevailing racist social order, she profoundly influenced her sons political consciousness. Growing up fatherless, Donaldson was influenced also by Sidney Frank Donaldson Jr. Indeed, his brothers passing interest in drawing led Donaldson, at about age three, to take up art. Throughout his school years, first at his mothers school in the small community of Faith (Jefferson County) and then at Merrill Junior High School and Merrill High School in Pine Bluff, Donaldson was almost singularly focused on art, sometimes to the detriment of his other studies.

After Donaldson graduated from college, his mentor, John M. Howard, chairman of the art department, persuaded him to accept a teaching position at Lanier High School in Jackson, Mississippi, for the purpose of establishing an art program for black students. He worked there for one year before being drafted into the U. After his military service, Donaldson settled in Chicago, Illinois, in the early 1960s and resumed his education, earning a masters degree from the Illinois Institute of Technology and a PhD in African-American art history from Northwestern University; he was the first person to be awarded a doctorate in this field of study.

In Chicago, Donaldson became involved in the black artistic community and, in 1967, co-founded the Organization of Black American Culture (OBAC) with the objective of using artistic expression, especially visual art, to advocate for civil rights. The groups signature project was Wall of Respect (1967), a mural painted on the side of a building located at 43rdStreet and Langley Avenue on the citys South Side. The murals eight sections featured images of fifty black heroes from various fields of endeavor. Donaldson and Elliot Hunter painted the jazz section. A celebration of black cultural achievement, the project inspired the creation of outdoor murals in hundreds of cities throughout North America and Europe. The first of Pine Bluffs downtown murals was painted decades later in the early 1990s and apparently without any awareness of Donaldsons involvement with Wall of Respect.

Wall of Respect was destroyed when the damaged building was demolished in 1971 following a fire. Following OBACs demise soon after completion of Wall of Respect, Donaldson co-founded another organization with similar objectives, the African Commune of Bad Relevant Artists (AfriCOBRA), and wrote its influential statement of aesthetic principles, which were derived from African artistic traditions. He organized the Conference on the Functional Aspects of Black Art (CONFABA) in 1970 and led the American delegation to the Second World Black and African Festival of Arts and Culture (FESTAC) in Lagos, Nigeria, in 1977.

From 1970 until his retirement in 1998, he was a faculty member and administrator at Howard University in Washington DC, serving as chair of the art department, director of the art gallery, and dean of the College of Fine Arts. Donaldsons art, which has been widely exhibited, includes the paintings Aunt Jemima and the Pillsbury Doughboy (1963), Wives of Shango (1969), and JamPact/JelliTite (1988), as well as the screen print Victory in the Valley of Eshu (1971).

Donaldson also was a prolific writer of essays on art criticism and history and a mentor to artists such as Harold S. Donaldson died of a heart attack on February 29, 2004, in Washington DC. The poet Haki Madhubuti eulogized him as an artist of the first rank. He was survived by his daughter Jameela and son Tarik Jeff.

Ten in Search of a Nation. Nka: Journal of Contemporary African Art 30 (Spring 2012): 7683. Sellers: Get your own map of past buyers. The item "VINTAGE AFRICAN AMERICAN WATERCOLOR PAINTING JEFF DONALDSON 1961 BLACK MOVEMENT" is in sale since Friday, August 25, 2017. This item is in the category "Art\Paintings".