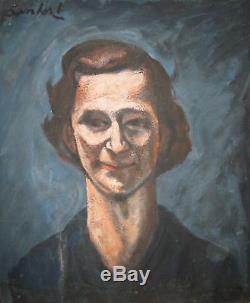 This fabulous painting by African American artist Walter Sanford (deceased 1987; birth has been noted as 1909, 1912, and 1915) is oil on composite wood board (estimated to be approximately 1/8 inches thick) and measures approximately 24 x 20 inches. It is dated 1 67 which I believe to be January 1967.

Sanford was from Chicago, IL. It appears this is a rare subject matter for this artist.

It is in very good shape for its age with no cracqueler, a few small losses near head as pictured and upper right; board is fairly straight. See some great information from a 1963 Negro Digest issue as pictured. Also, Walter Sanford first rose to prominence on the South Side in the'40s, when he had his first one-man shows at venues like the South Shore Cultural Center.

Sanford was heralded as "the black Picasso" for his cubist figure paintings and he won the Prix de Paris in 1952. Travelling widely in the'50s, he was influenced by Gorky, Pollock and other New York painters, and he became one of the only black abstract expressionists in Chicago. Thanks for looking at this fantastic African American antique painting. I have another by this artist in my store. Sellers: Get your own map of past buyers.