We Did What We Could, most famous African American black men 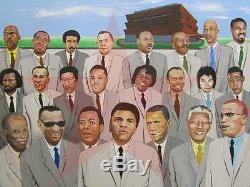 These were 23 of the most famous and well known Black brothers of modern times as proclaimed by the artist. Some were living and some were deceased. Several early viewers of the artwork suggested other renowned brothers should be included, but all were stymied as to who should be removed if the number stayed at 23.

Some were more recognized than others but all were legends. Pictures of each person were extracted from several sources with an attempt to paint them at about the same age. The suits and ties were all created by the artist.

Here are the names: Back row on left: Michael Jordan, Louis Armstrong, Richard Pryor, Booker T Washington, Martin Luther King, Jim Brown, Kareem Abdul Jabbar, Wilt Chamberlin; Middle row: Frederick Douglass, Jesse Owens, Arthur Ash, Willie Mays, James Brown, Tiger Woods, Michael Jackson, Joe Louis; Bottom row: Sidney Poitier, Ray Charles, Pele, Mohammad Ali, Barack Obama, Nelson Mandela and Malcolm X. Because that was the number the artist though he could adequately and appropriately capture on the size of the canvas he selected. The National Museum of African American History and Culture was shown in the background. The item "We Did What We Could, most famous African American black men" is in sale since Saturday, August 19, 2017. This item is in the category "Art\Paintings".