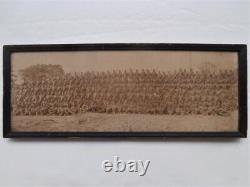 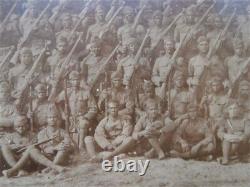 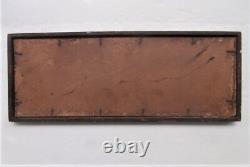 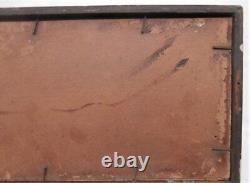 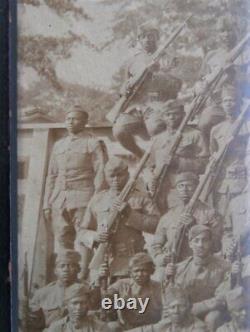 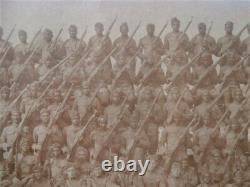 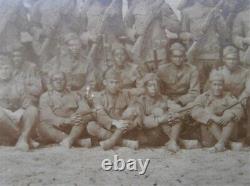 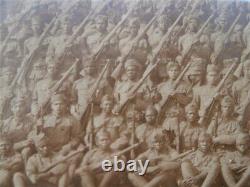 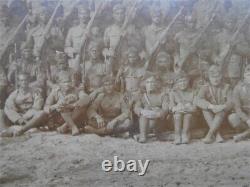 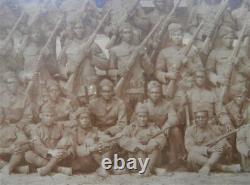 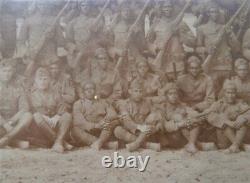 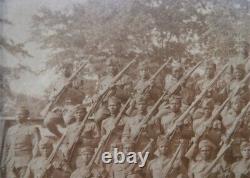 1918 original panoramic photograph of World War I (WWI aka WW1) U. Army AFRICAN AMERICAN soldiers who are members of the First Army of the American Expeditionary Forces. Untouched condition photo has never been out of the frame.

7 x 19 photograph is sepia tone. The darkest parts of it such as the shadows between the men'shine' when I tilt this in the light. I assume it's a gelatin silver print. Overall measurements with frame: 7 7/8 x 19 7/8 inches.

I'll pack it great and insure it just in case, but I'm not taking the glass off unless you promise me you won't be returning the photograph. As far as I know, this is a one of a kind item. I looked for any kind of comps online and on the web-site of the National WWI Museum and Memorial. I saw group photos, but not like this. Look at how many men there are, armed, wearing overseas caps (of which there were more than a few styles) and with the big "A" on their sleeves.

The 92nd and 93rd Infantry Divisions were African American. The First Army was commanded by General Pershing until October 16, 1918. The 92nd (Buffalo Soldiers; organized at Camp Funston, KS) and three units from the 93rd -- the 369th (Harlem Hellfighters), 371st (trained at Camp Jackson, Columbia, SC) and 372nd (organized at Camp Stewart, VA) -- fought from September 26 to October 8 in the Meuse-Argonne Offensive. The First Army was inactivated in April, 1919; the "A" on the soldiers' upper sleeve is "distinctive insignia" of the First Army of the AEF. On black soldiers in the front row, I see a sharpshooter medal, a rank patch indicating E-5 Sergeant, a wristwatch, etc.

These men were WWI United States Army troops from our First Army of the American Expeditionary Forces (AEF). They're from the 92nd and/or 93rd Infantry Divisions, w/ units having nicknames such as Buffalo Soldiers, Black Rattlers, and Harlem Hellfighters!

Germany's U-Boats were sinking U. African Americans wanted to go and help. These black men were from National Guard units, etc. African Americans were fighting a different battle here at home, for their civil rights, yet despite racism, they put'Country First'. What I love about history is that we're always making it.

That was First Army "distinctive insignia", but good luck finding another photograph like this where you can actually see WWI African American U. Army soldiers with this distinctive insignia "A" on their shirt sleeves. One unit of the 93rd, the 369th (Harlem Hellfighters), was led by Col. The AEF was commanded by Gen.

When the Spanish-American War broke out, Pershing was selected to command the Tenth Cavalry once more and led his men in Cuba at the Battle of San Juan Hill. The bravery and courage shown by the men of the Tenth Cavalry earned them Pershing's respect and admiration. He often praised the black soldiers to others, an unusual thing to do during this time. Despite what some people may say and think they know, I'm not aware of Pershing personally wanting the men who came to fight in WWI being labor troops instead of combat troops. William Hayward made serious efforts to NOT have the men relegated to support roles.

Ultimately, the men got to fight alongside the French, which is what I assume we were in France to do. The French appreciated the help and awarded hundreds of African American men individual decorations for heroism. We won, Germany lost, and that's the outcome we set out to achieve! This item is in the category "Collectibles\Militaria\WW I (1914-18)\Original Period Items\United States\Photographs".